Azure App Configuration has a great feature known as feature flags. This allows you to control aspects of your application using flag which determine if a feature is available or not. In this post we look at retrieving settings using an Angular service.

One of the most basic implementations is to have flags defined with a simple boolean true or false to determine the state of that feature.

Adding a new feature is really simple, once it’s created, you can then enable or disable it from the main Feature manager pane by just clicking the check box.

Another common scenario would be supporting the availability of features based on a group or user who is logged in. Thankfully you can achieve this really easily using Feature filters in Azure App Config. 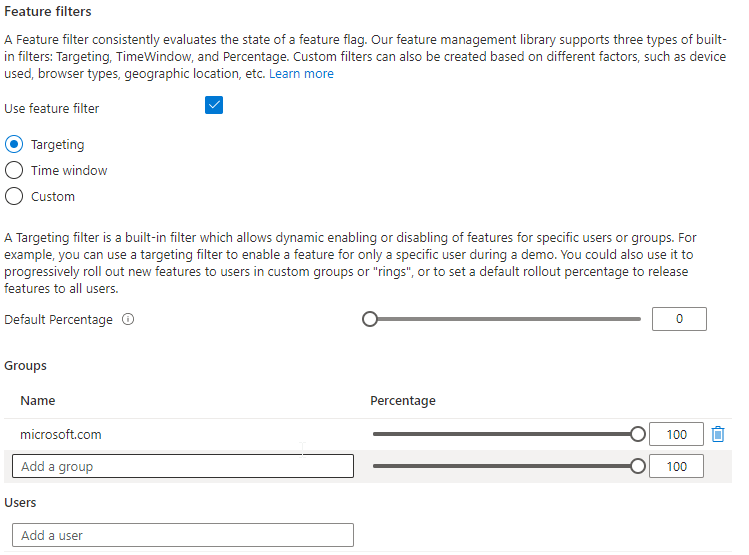 In the screenshot above, you can see we have enabled feature filters, selected the targeting type and then added a group, we’re using the domain of microsoft.com in this example, it could be whatever you want. That way, when someone logs into your application with microsoft.com in their domain, it will now provide them access to this feature.

This now needs implementing into our Angular application so we can dynamically display features.

In order to make this usable throughout your application, make use of an Angular service. If you use the command line, you can create a new scaffold service by issuing the following command: ng generate service services/feature. I create all my services in a folder of the same name, your implementation may be different.

From here you need to ensure you have the right packages installed. Using NPM, install the following packages.

In your environment file, enter a new entry for your connection string, something as follows.

Don’t forget you’ll need to add import statements for the modules we will be making use of. Open up your feature.service.ts file. Enter the following.

Next, we need to add some methods to our new service, above the constructor, add the following line:

We now need some methods, I have three methods in my service, one that simply looks if the feature is enabled or not. Secondly one based on either group or user filtering as we discussed in the previous step.

Firstly, let’s create a method with the following code to look for if the feature is enabled or not.

Our response is a boolean based on the enabled value of the returned JSON object.

Next is a method which looks for the specific feature filter based on your group or domain.

This method is a little more involved, first of all, we are looking to make sure the feature is enabled, you could have the scenario where the feature is disabled but you are part of the filtering specification, so this check is ran before we look to see if your domain is part of any of the list of groups specified.

Finally, we do the same method for users, it’s a simple change on the returned object from retrieving the feature flag configuration.

We now need to implement our service into one of our components. Imagine using this in your navigation menu component, we can now implement dynamically the menu based on feature availability. First of all, import your service, don’t forget your paths may differ. You’ll also need to include the service in your constructor as shown below.

Next, you can set a variable and call the service to set the variable to either true or false based on the processing that takes place. Here are some examples of the implementation.

Finally, instead of hiding using style visibility, which isn’t a great way of hiding or showing features, you can make use of ngIf to determine if you want to render the HTML. Here is an example.

You would want to also consider that if someone knows the address of the route, then that does not stop them from accessing the route, you would need to consider implementing a custom guard potentially that could implement the same service and protect against that.

Otherwise, this provides a nice simple way to interact with feature flags in Azure App Configuration.